The Bickerton Portable was evolved because I needed to combine public and private transport with some other cheap, more convenient and healthy form of travel to extend my personal mobility, and felt there must be a large market for the right idea. 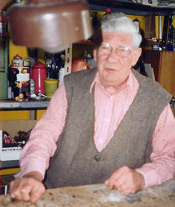 In an age when men can be landed on the moon I felt that we must have the technology and material to solve this requirement more neatly.

The Bickerton Portable is my answer, not only for the train commuter who wants speed, economy, and healthy, yet gentle, exercise provided by the Bickerton, but also, of course, for countless car drivers and bus, tube, boat, caravan, and even plane users who need door to door transport and extra personal mobility.

However, before examining the possibility for a totally new type concept bicycle to replace the anachronism which people generally use today as bikes – a design, by the way, that has changed very little in appearance, materials or production methods for nearly 100 years – I considered a terrific range of ideas.

Everything, in fact, from an inflatable man-carrying balloon to rubber-powered roller skates. In the end though, I concluded that a new PORTABLE bicycle was likely to be the best answer.

The main features are supremely light construction, portability and compact size. When folded, it’s small enough to go into the boot of a Mini, light enough to hang on a hat stand.

It has standard steel wheels, 14” in front and 16” at rear; Weinman brakes; folding and extending handlebars; steel clamp hooks, at the main fold; a cotterless chainset with nickel plated chain for corrosion resistance and cleanliness; quick release pedal attachment, and a sliding seat pillar adjustment.

Perhaps the most surprising discovery was that, having designed and made the first pre-production aluminum bikes, I found the machines really marvelous to ride.

Acceleration is amazing, hill-climbing outstanding, and the general responsiveness and performance is quite exhilarating – compared to bikes of conventional design or specialist lightweights costing £200 or more.

Best of all, these features are provided with a bike that is extraordinarily easy to lift and handle and which gives a superbly comfortable and resilient ride, so you seem to glide over even rough going and badly paved streets.

As the first truly portable bike in the world this unexpected bonus – its super riding quality – is one of the biggest surprises and sources of satisfaction to me. It makes it very worthwhile especially now, as through TCK Group we can offer the Bickerton’s performance and convenience to tens of thousands of people worldwide.